Skip to content
HomeBritish Cycling - TrackTrack Cycling NewsLondon 2012UCI Track Cycling World Cup Classic – Manchester…
Round 4 of the #twc2011 UCI Track World Cup Classics, brings the Worlds best Elite Athletes back to the UK. February 18th to 20th will see Manchester once more host the final preparations before the UCI World Track Championships 2011 in Alepdoorn, Netherlands on the 23rd -27th March. Although most Nations are playing down the fact that it’s still 6 weeks to the World Championships & individual athletes are not at their best. Britain is still fielding the strongest squad since the 2010 Championships.

No less than 8 Olympic Gold Medalists & many Current or Ex World Champions will be out to gain as many points as possible, but top place France & 2nd top place New Zealand have other ideas. Along with a strong Australia squad, this is going to the highlight of the World Cup Season & a must see, for any Track Cycling fan. Tickets were sold out weeks ago, but you can still win tickets from various vendors by following the usual Social Networks.

Latest update 14-02-11. Rebecca Romero won’t be taking part in this Track World Cup Classic whilst recovering from an injury. Rebecca should be back to full strenght for the Track World Championships in Holland, late March. 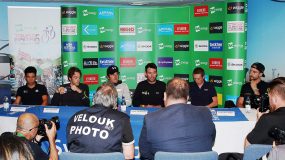