The Dutch team were active from the start, with Demi Vollering launching an attack to split the field before Van Vleuten attacked on the Lofthouses climb with just over 104km to go. She quickly gained 27 seconds which then increased to 44 seconds as a selection of eight riders looked to try to bring Van Vleuten back. Van der Breggen, Spratt, Longo Borghini from Italy, GB’s Lizzie Deignan and recently crowned World Time Trial Champion Chloe Dygert were all in the group.

After five kilometres on her own, Van Vleuten had increased her lead to over a minute and it would hover around the 50 seconds mark until the race reached Ripon with around 70km still to go, where it dipped to 43 seconds as Deignan and then Dygert launched attacks to try to bring her back. But with van der Breggen closing every attempt down, it became increasingly obvious that whilst van der Breggen was still in the group, any attempts to bring van Vleuten back would be in vain.

By 50km to go, the impetus had gone out of the chase group and van Vleuten’s lead had extended to over one and a half minutes. Deignan and Longo Borghini attempted to split the group but to no avail with Dygert also trying to split it. It was at this point that Koppenburg from Germany was dropped. Deignan looked totally frustrated as move after move was shut down.

By the time van Vleuten reached Harrogate with 40km to go, the win seemed to be hers for the taking as the gap reached 2 minutes 37 seconds back to the chasers.

Dygert saw her chance as they reached Harrogate, and with 38.8km still to go, she launched an attack that would put paid to Deignan’s medal hopes as she was unable to get back up to the chasers. The group now became four as Dygert continued to press on and distance Deignan.

With the gap around 2 minutes 12 seconds to van Vleuten, Dygert attacked the chasers again and this time van der Breggen was unable to bring it back, with Dygert going clear. Her gap would extend to a maximum of 29 seconds with 18km to go, at which point Spratt attacked and Longo Borghini was distanced.

By 16km to go, it seemed like the distance was starting to affect Dygert (whose longest race before today was 119km) and as she entered Parliament Street and the finish for the penultimate time, Spratt and van der Breggen were closing the gap, and they would then catch Dygert with 12.7km to go.

By now, Van Vleuten’s victory was secured and she powered up the finishing straight to become the World Champion, with van der Breggen 2 minutes 15 seconds behind, and Spratt a further 13 seconds in arrears. Dygert finished a fantastic fourth, 3 minutes 24 seconds behind van Vleuten, Longo Borghini finished in fifth a further 1 minute 21 seconds down, with Marianne Vos leading in the peloton at 5 minutes 20 seconds, which included Deignan and Anna Henderson who finished 22nd.

But the day belonged to Annemiek Van Vleuten, whose incredibly courageous ride has deservedly secured her place in the history books.

Netherlands rider Annemiek van Vleuten said: “That was crazy. I knew the climb was really far from the finish but once I’d attacked my coach told me to keep riding hard and I was lucky I had really good legs. It was definitely not planned but I’d trained so hard for this – put in so many hours on the bike – and I thought ‘if anyone can do this, it’s you’. As I was riding I was thinking ‘maybe I could make history today’, and if it didn’t work out I knew Anna [van der Breggen] was in a great position behind.

“It was only towards the end that I dared to believe, and I was being cheered on by so many fans. The crowds in Bradford were huge at the start and I had so much encouragement out on the course as well. British fans are amazing and I want to thank them all for helping make this win so amazing.”

Great Britain rider Lizzie Deignan said: “Today was absolutely phenomenal and a massive privilege to be able to experience. I’m so grateful for the opportunity to ride a home World Championships and I just want to say thank you to all those people who supported me. It’s a day I’ll never forget and I’m so proud of Yorkshire. Congratulations to Annemiek too, she was in a class of her own today.”

The 86km race set off from Doncaster with Jastrab one of the clear favourites, alongside Britain’s Elynor Backstedt and European Champion Ilse Pluimers from the Netherlands. The nature of the course meant that the peloton would stay pretty much together for the duration, although this also resulted in a number of crashes.

The first break of the day came from Kazakhstan’s Diana Bukanova whose solo attack lasted for around 25km and saw her get an advantage of nearly a minute over the peloton before she was reeled in with 50km to go. A crash just after Bukanova was caught would see Pluimers’ hopes for a medal dashed, although those involved would later form a group to try and get back on.

This crash coincided with the first of a handful of attempts by Jastrab to split the field, although the next main attack would come from France’s Cedrine Kerbaol, who was quickly followed by the sole Chilean in the race, Catalina Anais Soto Campos. The pair launched their attack with around 25km of the race remaining, and would build up a gap of around 30 seconds which they would retain until around 6km to go when Soto Campos launched a solo attack. Soto Campos would eventually be caught with around 3km to go.

With around 2km remaining, Russian Junior Women’s World Time Trial Champion, Aigul Gareeva and Jastrab launched an attack and with 500m to go, it was touch and go as the duo had around 100m advantage on the peloton although another crash in the final 500m did little to stop De Wilde and Nooijen who made up significant ground to deny Gareeva of a second World Championship medal. Jastrab’s advantage by this point was unassailable and she held on to give USA a third world title in as many days.

USA rider Megan Jastrab said: “I’ve wanted to win this race for several years now so to have everything come together today is just amazing. It’s incredible how well the USA is doing in these Championships and I am so happy for all the team. We love riding here and I wish I could take two more weeks to enjoy these roads even more, but on Sunday I have to go back to reality, and back to college.”

Great Britain rider Abi Smith said: “It was amazing riding on my home roads today and the crowds were unbelievable. The schoolkids were screaming really loudly and I heard so many people shout my name, which was lovely. It gave me more adrenalin and kept me motivated. There were so many Yorkshire flags on the route as well and I just wanted to grab one of them and wave it whilst I was riding and give the supporters a wave back. Things didn’t go quite as we’d planned today but I’ve loved the whole experience and hope to have more chances in the future.” 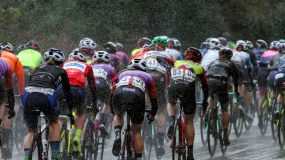