Seven venues hosted this year’s Tour Series starting in Redditch and finishing with a new venue of Brooklands in Surrey. Old favourites were visited once again including the hardest course around the leafy & cobbled circuit in Durham, the longest established venue to-date – back for its tenth edition. Scotland too, hosting two rounds in Motherwell and Aberdeen.

Anna Henderson – Brother UK – Tifosi p/b OnForm won the individual final race of the Series in Brookland, her second this season as she beat Elizabeth Bennett – Velo Performance as the pair broke free to contest the win.

The OVO Energy Green Leaders Jersey’s changed hands several times throughout the Series but it was Brother UK – Tifosi p/b OnForm that claimed the first victory initially with the individual win going to Jess Roberts – Team Breeze – Anna Henderson picking up the Red Eisberg Sprints Jersey for her efforts winning the first sprint ahead of Jo Tindley, Jess Roberts, Becks Durrell & Becky Raybould where she broke free with Roberts eventually crossing the gap with around 15s advantage. Henderson taking the second sprint. The leading duo were caught as they played cat & mouse with Durrell reaching them first. Henderson went with Roberts chasing into the final corner with Durrell right behind. Henderson went wide & Roberts seated firmly powered to the line with Durrell third.

Roberts Said afterwards: “The bunch came & caught us (Henderson & herself). I wasn’t expecting that. Luckily I held on to the end”.

The Series headed north to Scotland for the next two rounds, firstly Motherwell then Aberdeen.

Taking on the might of former winner in Motherwell Katie Archibald (guest rider for Team Scotland) Jess Roberts powered to her second back-to-back victory fighting off another Scottish guest rider Neah Evans finishing second & Elizabeth Bennett – Velo Performance third as the three riders held their-own some half-a-lap ahead for the chasing group. Evens launched her attack out of the last corner but Roberts had the better legs.

Roberts took the first Eisberg sprint without contest and the chasing group were some 26s down. Katie Archibald launched an attack to bridge across in the latter part of the race but couldn’t close the gap to finish fourth. Raybould also chasing behind Archibald got caught just before the line by team-mate Josie Knight who finished fifth.

After Round 2, Team Breeze moved into the Leaders Green Jerseys and Jess Roberts into the Red Eisberg Sprints Jersey.

It was Jess Roberts that took individual glory at Round 3 in Aberdeen making it three-in-a-row and holding on to her Red Eisberg Jersey as Team Breeze held their Green Leaders Jerseys.

No mechanical issues for Anna Henderson this year that had cost her the glory in Durham last season on the Cobbled Classic Circuit. Roberts once again showed strength saying with Henderson before finally succumbing to the furious pace set by Henderson in her National Circuit Race Jersey at 17s deficit and her determination to win this time around.

A trio of riders broke free with Jo Tindley, Velo Performance in the Red Eisberg Jersey the third rider before losing pace as the duo eventually gained almost a lap on their closest rivals, such the pace. Tindley eventually caught on the final lap by Becks Durrell, Gaby Shaw & Anna Shackley.

Roberts mistakenly took the penultimate crash corner badly giving Henderson an advantage up the cobbled climb that couldn’t be closed. Roberts retaining the Red Eisberg Sprint Jersey as the Green Leaders Jersey moved back onto the shoulders of Brother UK – Tifosi p/b OnForm.

Henderson Said afterwards: “I said I’d be back for blood – and I came back with a bit between my teeth – So yes it was a good night”.

A new venue for Round 5 in the Wirral at Birkenhead provided the closest finish so far this season and was too close to call on the line. A group of eight riders rode clear early-on with all the favourites in the mix including Henderson, Roberts, Bennett, Tindley, Durrell, Alice Speake, Velo Performance & Rhona Callander – Team Breeze & Annie Simpson, Brother UK – Tifosi p/b OnForm.

Durrell lead the group out of the final corner onto the long straight finish line with Tindley second & Henderson third on the outside line.

It looked like Jo Tindley may have gotten Velo Performances first win only to find that Lincoln Grand Prix winner the weekend before Becks Durrell pipped her to the line in the photo finish as they track lunged together for the victory.

Tindley Said afterwards: “Getting to the line – you know – you’ve done everything you can at that point, thinking you have just done enough. She got it – she deserved that cos she went ever-so-early on that last lap. I was expecting her to go pop! But she just led it out. So I thought right, I’ll try everything to get past her – so yeh”.

The OVO Energy Tour Series returned to Salisbury for the penultimate round & Becks Durrell Brother UK – Tifosi p/b OnForm took back to back wins almost ensuring their overall victory in 2019.

The challenge came from Team Breeze once again, this time with Rhona Callander narrowly missing out. Roberts retains her Red Eisberg Sprints Jersey to take overall victory in Brooklands in that competition.

The final Round in Brooklands proved fruitful for Henderson winning her second race this season & sealing the overall OVO Energy Tour Series 2019 Title. Bennett her closest threat for Velo Peformance came a close second once more denying them a victory in this years competition but securing third place overall in the main event. 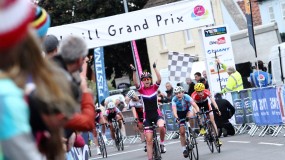 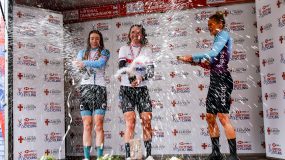 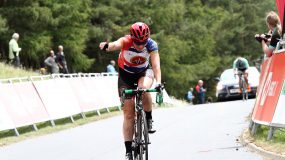