Drops fall whilst Ambitions have risen!

After an incident packed race around the drag-to one-point-four-kilometre town-centre-circuit that saw Emily Kay, Team Breeze and Sarah Bradford, Team Jadan-Weldtite clip the barriers on the first full lap, others coming off through-out the race and Points Jersey holder Annasley Park, Team Breeze and Nicola Moerig, Podium Ambition sliding out on the penultimate lap, it was a race of nerves for the girls.

A slight split in the early stages of the race were brought back together on the run-up to the first sprint of the evening with around thirty riders making the lead group.

National Criterium Champion Nikki Juniper took to the head of the field in the drag-to the finish line making sure she was in front of the green sprinters jersey of Annasley Park, second over the line.

Claire Rose took over the front of the field soon after, showing signs that Podium Ambition wanted to get something out of this round as they made their way through back markers along the way.

Nicola Moerig, Podium Ambition took over the front on the run-up to the second sprint with a nine-rider lead group going away.

Juniper went from the bottom corner up to the finish line once more, with Park resigning to second place again in the second sprint of the day.

More importantly in the Team Competition, Podium Ambition had four girls in this nine-man group, Grace Garner and Dame Sarah Storey joining the back of the group. Team Breeze had Park and Haley Jones, whilst Leaders Drops had Alice Barnes and Annie Simpson.

With less than two laps remaining Park and Moerig went down and Storey got caught behind them. This left only six riders in the leading group.

Passing over the start/ finish line for the bell lap, Rose powered away to the top corner thinking Garner was following. Looking behind her, she had a significant lead and decided to continue pushing hard all the way to the line.

The five chasers were ten seconds behind with Juniper taking the bunch kick.

The third Podium Ambition’s rider over the line in sixth was Storey, who was caught in no-mans-land. Fending off the final group finish, Storey had a minuets lead and team-mate Lauren Creamer eleventh position finish put Podium Ambition’s tally at one-hundred-and-three, claiming the Best Team Award on the night, moving them ahead of Team Breeze and into second place, behind Drops, who retain the overall.

Nikki Juniper had done enough to become the new Points Leader going Round Four in Stevenage on the Monday, with Croydon on the Tuesday and finally the last round in Portsmouth on Thursday 9th June everything was still to play for.

Tying up the final three rounds of the 2016 Matrix Fitness Grand Prix firstly was a visit to Stevenage. The one-kilometre course is primarily a flat two ended course with long straights. A fast race was in the order.

Starting off altogether across the line on the first lap, the peloton soon become some-what strung-out into a long line. A blow-out from a front tyre from Hayley Jones, Team Breeze put pay to her assault on the Team Prize, disrupting the long line of riders behind her.

Alice Barnes goes after bridging a gap to a couple of leading riders, sails past them and continues solo, collecting the second sprint on the day with almost a minuets lead on the rest of the field. Juniper second and Gabrielle Shaw, Podium Ambitions third. Nikki Juniper wins the sprints on the night along with the Green Jersey.

One-Two-Three for Drops Cycling! Sprinting from the bottom corner Rebecca Durrell and Laura Massey bring it home. Winning the Team Competition on the night, Drops extend their lead by fifty-three points clear of Podium Ambitions on 329 points and Team Ford Ecoboost move up into third with 294 points.

The penultimate round in Croydon on the following evening is essentially a rectangle one-kilometre circuit. Through the centre of the town, the course was a bit slippy and rain had fell earlier in the day.

Grace Garner, Podium Ambition was the first to rider away from the peloton and went on the win the first Sprint Points away-out-in-front. Juniper was second in a powerful kick along with Barnes reeled Garner back as the lead group came back together.

An eleven rider group formed towards the back-end-of-the-race with all the usual players in the front group. A strong performance from Neah Evans, Scotland Cycling Team, Beth Crumpton, Boot Out Breast Cancer and Louise Laker, Aprire HSS Hire saw them mixing in at the front end of the race to.

Neah Evens led the group over the line for the bell lap as the girls prepared themselves for the final bunch sprint.

Drops had three girls in the bunch, but Boylan, Team WNT positioned herself on the front for the final corner. A powerful kick from Grace Garner, Podium Ambition took the victory a clear two-bike-lengths ahead of Barnes, Juniper third.

Another Team result for Drops Cycling with Ford Ecoboost a close second and one point down, Podium Ambition. Drops extend their lead to fifty-six points ahead of Podium Ambition for the final round in Portsmouth on June 09th.

A technical one-point-two kilometre course welcomed the riders for the grand final in Portsmouth.

A sunny day with double points on offer meant a lot still to play for. Nikki Juniper had the Green Sprinters Jersey sewn-up, a notable absence from the field was Alice Barnes, Drops Cycling who was her closest rival for the jersey and Annasley Park, Team Breeze, whom led in the earlier rounds.

The field held together for the first Sprint. Juniper, Garner and Boylan in that order.

The three push on, stringing the field right out, but still staying together the imputes drops.

Second in the Redditch round, Jessica Roberts, LIV Cycling Club – Epic Coaching decided to up-the-pace. Broughton and Team Breeze try to follow but a gap is already opened. Concentrating on the Team Classification, Roberts pushes off on her own, still a long way to the finish-line.

Roberts collects the final Points in the Series, Juniper second back in the bunch and Garner third, marking her move across the line.

A three rider group form off the front on the main group, Elizebeth-Jane Harris, Podium Ambition, Jo Tindlay, Team WNT and Charlotte Broughton, Team Ford Ecoboost. Team Breeze are left to chase it down with Emily Nelson doing all the hard work into the bell lap.

Roberts wins the race by twenty-seconds and the pace by the chasing bunch increases significantly on the run-up-to-the-line. A disaster for Drops as Rebecca Durrell slides out leaving Lucy Shaw driving the bunch. Garner is in close pursuit and Juniper trying to hang-on.

Garner sweeps past the three chasers on the road on the final corner, and that is enough for her to win the Individual Title for the Matrix Fitness Grand Prix Series.

EJ Harris finishes third for Podium Ambitions with Gabriella Shaw’s eighth giving them the final Team win on the night and stealing the overall Series Victory from Drops Cycling, whom had led through-out the six-round event starting back in Motherwell.

Thanks to Pete & Grace for media access through-out the Series. 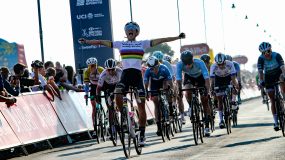 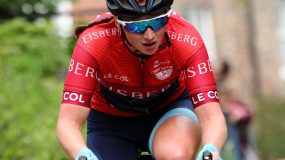