JTL Condor p/b Mavic secure the Revolution UK Championship 2016 and move on to Revolution Champions League which kicks off in Paris in four weeks time. Joining them are Team Pedalsure, Team WIGGINS and Maloja Pushbikers RT.

Bolstering up Maloja Pushbikers in this final round, Matt Rotherham partnered with Christian Grassman to help secure their place in the Championship League. Rotterham, a sprinter, had been riding the Sprint Omnium Series previously along with his brother Tom and proved a difficult rider to get past.

Matt started the afternoon session off with win in the Elimination Race fending of the likes of Ed Clancy [JLT Condor p/b Mavic] and Nico Hesslich [Revolution Allstars] showing he has the stamina for the longer endurance events too. Backing up his first event he also took the Flying Lap ahead of Clancy whom normally excels in this event posting a clear half second over two-hundred-and-fifty meters.

Matt then struggled in the Points Race finishing last, but teamie Grassman managed a lap that had him finishing fifth overall. Yoeri Havik [Team Pedalsure] stole the show lapping the field twice to secure their first win of the day.

An off day for JLT Condor in the Revolution Madison Time Trial saw the pair take their first Madison TT this season with a 55.118 ahead of Team Pedalsure and Team USN.

The final race in Manchester tonight, the Girls Six-Lap-Dash saw Russell light up the torch on the final lap as a lone break from Lucy Naylor [Nab Racing] had a half lap lead as the bell rung. The bunch had rode mostly together but looked like they would contest second place. The pace exploded and Russell’s rockets went into warp-drive to finish the Championship light years a head.

Russell started the evening off with a win in the Scratch Race whilst Ella Barnwell [Team USN] won the Points Race securing her third position overall behind Anna Docherty [Team Pedalsure].

Vox Women lead the way in the Women’s Championship after round two, but a one woman team of Neah Evans put Podium Ambition p/b Club La Santa back on top having won round one.

Evans was no match in the afternoon session wining all three races, the Elimination Race, the Flying Lap and the Points Race.

Neah’s strong event from her sprint days the Flying Lap set a 14.800 ahead of Team GB’s Ellie Dickinson and Amber Joseph [Vox Women].

Evan’s came up against Dickinson again in the Points Race but wining four sprints over the twenty-kilometer event and gaining a lap with five others kept her in the lead through-out. Team Footon Velosport’s Christine Robinson led them across the final sprint and double points.

Dickinson got the better of Evans in the first race of the evening, the Scratch Race. Team Footon Velosports Laura Basso finished third with Holl fourth.

The final Women’s event the Elimination Race saw Evans back on top. Italian’s Cecchini and Basso were second and third with Dickinson finishing in forth.

Tom Rotherham won the Sprint Omnium event gaining the least amount of points throughout the day. Finishing consistently in the Keirin, Six-Lap-Dash and the Handicap Race Rotherhams only win was the Elimination Event.

Elite Women’s Championship After Round Three 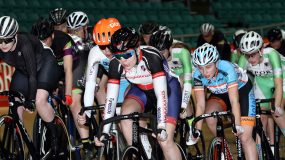