Latham travels to Hong Kong next weekend for the UCI Track World Championships April 12-16th missing round two of the four-race early season openers in the Spring Cup Series which moves South to Louth in Lincolnshire for the Tour of the Wolds another new edition.

No sooner had the race officially started and a pile-up on the run-in-to Carlin How saw the race halted before re-starting some fifteen minutes later.

Riding in an anti-clockwise direction the race re-joined the A171 Whitby Road near Scaling Dam before heading back down to the coast and north bound towards Saltburn-by-the-Sea.

As the gap grew to around a minute, Matt Holmes for Madison Genesis bridged across for the second lap and they extended their lead to over five minutes at one point.

Approaching the final lap, a matter of urgency saw the time drop below two minutes advantage before Matt Holmes was the only rider left out front.

The course, a tough start to the season according to local lad Harry Tanfield dwindled the Peloton by half and an attack by Hayden McCormick for One Pro Cycling on the run in was joined by Alistair Slater for JLT Condor, Liam Holohan for Metaltek Kuota Racing Team and Taylor Gunman for Madison Genesis.

With only a few kilometres remaining it looked like a bunch sprint was inevitable with the victory going to Chris Latham by a narrow margin. 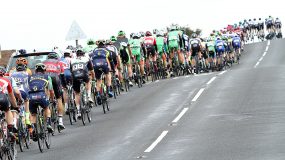 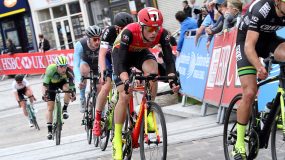