10 July 2015, Round three of the British Cycling Elite Circuit Series returned to the newly refurbished Stockton-On-Tees high street for its fifth edition.

With fifty-seven riders taking the start line, the race got underway shortly after 7.00pm. Riding clockwise from the start, the 1.1km circuit took in the re-designed high street including a cobbled section before the bus station, continuing up and around the town hall, before returning back through the new water fountain basin and across the start/ finish area. 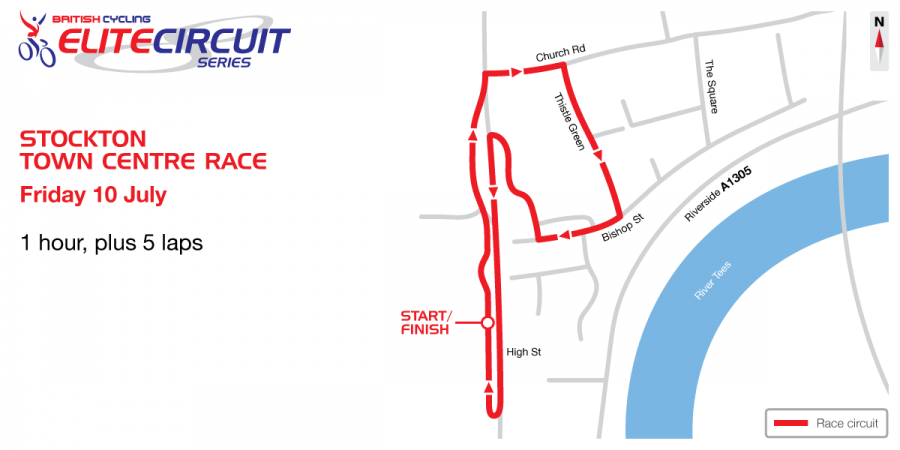 The race as usual covered one hours racing, plus an additional five laps including four designated sprint laps.

The race pace set off high with Pedal Heaven making the first move. The peloton dwindled down to half the field as the race progressed to the halfway stage.

With attacks by Graham Briggs, Jon Mould and Alex Paton, nothing really became significant. Pedal Heaven were determined to snap the elastic, but as the hour approached, the leading group reformed once more.

George Atkins bid for a third consecutive victory in the final few laps came to nothing as the field again reformed, and a it looked like a final bunch sprint would decide the race on the night.

Team Wiggins Chris Lawless came out of the water fountain basin first and with less than twenty-five metres remaining to out sprint a determined David McGowan. Third over the line was Graham Briggs with Will Fox fourth.

Cycling Shorts: How did the race go for you tonight?

Chris Lawless: “I was quite tired all the way through the race tonight, and when I got on the bike I wasn’t expecting to win.” he went on say that he was always slightly confident should come down to a sprint.

Chris Lawless: “The only tactic I could go for really tonight was to sit in and watch the dangerous moves that were going away, the big ones. Then tag along with them, not make the move myself, just sit there and if it goes, then go with them, if not, sit back and wait for the sprint.”

Cycling Shorts: Do you like these sort of circuits?

Chris Lawless: I like twisty circuits, they are always fun to ride. I don’t like a track that is just really square, just four corners. It’s quite fun to ride when there are a few chicanes and a couple of u-turns. You never know what’s going to happen on a circuit like that, so, yes, it’s fun.

Cycling Shorts: Are you enjoying being part of Team Wiggins?

Chris Lawless: It’s a real good set-up. The name brings a lot of publicity, which helps us get into some good races.

Full Results can be found on British Cycling Website

Stockton-On-Tees put a successful bid in for the 2016 National Road Race Championships. Further details will be released in the near future.