Sky Pro Cycling’s Peter Kennaugh came out with guns blazing. Active from the start, Kennaugh collected the first lot of points on offer. It wasn’t going to be easy for him. Sweltering temperatures outside made any effort inside the Velodrome hard work. 100%ME’s Simon Yates, Mark Christian & Jonathon Mould worked him over, several times. But, Kennaugh had other ideas. Collecting six sprints in total the quartet gained a lap on the bunch around the ¾ mark. With 20 to go, it was Kennaugh who collected maximum points. Only Christian could score some additional points, but was by now out of harms way. Kennaugh eased to the back. But stamping his authority on the race one more time, Kennaugh took the final five points along with the title & the gold medal.

Para-cycling’s Jon-Allen Butterworth beat his own World Record to claim the Gold in the 200m Flying TT and become the National Champion 2011.

(In Para-Cycling, the object of the race is to beat the World Record for your disability. So the closer you get to that record, the more points you will get. A points system decides the actual winner of the race. In the above race, Jon-Allen Butterworth beat his own MC5 WR by a slightly larger margin than Aileen McGlynn’s FB WR) 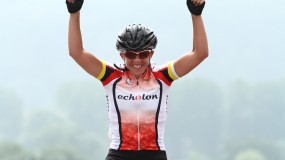