Alexandra Women’s Tour of the Reservoir 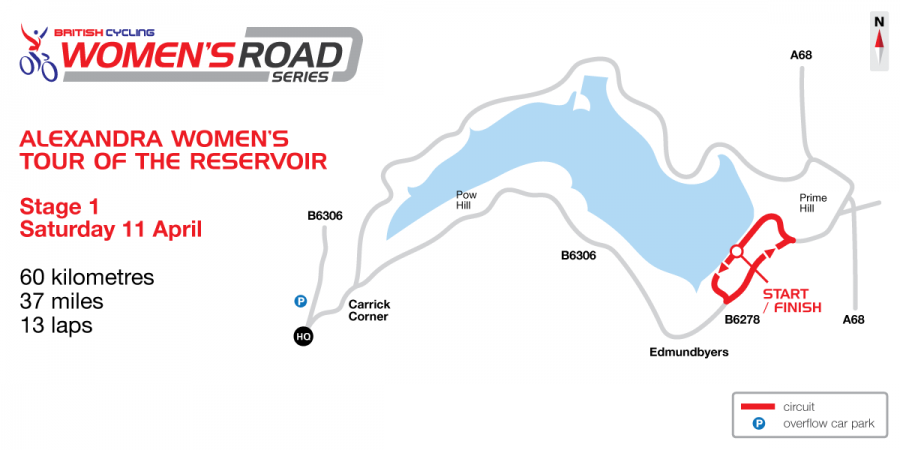 Expanded into a two day race. The Alexandra Tour of the Reservoir returned for the second year. Sponsored by Northumbrian Water once more, the first race got underway around a small Kermesse Style circuit clockwise across the Derwent Reservoir dam wall. (Not as the map shows)

A strong squad from Matrix Fitness, Team WNT & IKON Mazda added to the mix, and provided a top class start to this years British Cycling Women’s Road Series, the first of eight rounds.

Gaining 20 secs from a group of fifty or so riders in the first lap of thirteen, Dani King & Katie Archibald set a blistering pace, that proved too hard to bridge throughout the remaining circuits. Juniper, who’d had the legs to go with them punctured early on, and a slow wheel change from Neutral Service saw her drop by 1:45s on the second main bunch on the road.

With a strong North-Westerly wind blowing, Juniper fought her way back eventually to the shelter of the second chasing group of around 30 by now, and around three and a half mins down, with the first smaller group being two mins behind the leaders.

A crash in the earlier stages had splintered the bigger group and by the concluding lap, Dani & Katie were lapping the field.

Katie lead the final three hundred meters, but Dani had the energy, (and the voice) to come round her, for the sprint, and claim the stage one victory. Leading the chase group over the line for third was Charline Joiner – Team WNT.

I caught up with 2014 Women’s Road Series Champion Nicola Juniper after the finish of Stage One. “I’m back mentoring a very young team”. Team Giordana – Triton are a new British women’s racing team formed at the start of 2015. The core of the team are riders from the old RST/ NFTO. They were five of the more senior members present, for this two day race. Nikki, Annasley Park, Lauren O’Brian, Keira McVitty (DNF) & Sarah Bryne (DNS).

I asked her about her plans for this year, & about the first days race that had not long finished. “It’s very frustrating isn’t it”, “I went all last season without a puncture, and over the cattle grid (lap one), the front wheel went down”. After riding up to the finish line on the rim, she waited about 2 mins for Neutral Service, who swiftly changed her wheel. Nikki had already noticed the girls had really splintered. “I chased back on for around seven laps”. Over the loud speakers, she could hear that a big group (second bunch of chasers) were around 40s ahead of her.

Her thoughts then, were to just dig-in and catch that group. Recover, and try damage limitation in readiness for tomorrows race two. As she joined the group, she realised there were girls already away, and with only three laps remaining, just sit in, and see if there was anything left in her legs to sprint.

Nikki laughed about the bunch sprint finish. Blaming her age and failing eyesight, miss-jugging the distance to the finish line. She saw the finish line approach she said. “It was a bit further than I realised”, “I’ll just go for it”, she thought. “I went a bit early” “And fair play to Charlotte Broughton (Corley Cycles – Drops RT), she went round me”.

In the end, Nikki was happy getting second in the bunch sprint, after seven laps of hard chasing. Nikki finish 16th, over 3 and a half mins down on stage one.

I asked her about the rest of the series. As last year, she’s was going to take it race by race.

I’ve already said that I won’t be coming into this season to defend the title. I’m going to try and ride consistently, but the depth of the women’s field has grown. There are fifty faces here I haven’t seen, and loads of juniors coming through. So this year, I’m just going to enjoy it (racing, that is). Try a few things, and mentor, and help the girls along the way. I’ll just see what happens! 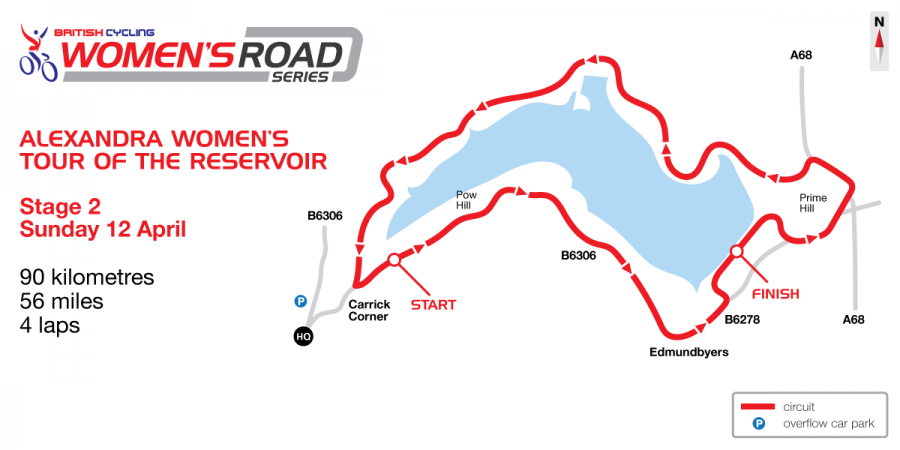 Stage two started off in deteriorating conditions, with the promise of wintery showers and increasing winds. Rolling through the start-line and up-to the feed zone, the peloton had already shed around a third of the girls. Continuing around the Reservoir Circuit the field began to split further after the Prime Hill climb, and down the rear part of the course past the Yacht Club.

Joanna Rowsell – Pearl Izumi Sports Tours Int’l made the first break, with 2014 champion Nicola Juniper ten seconds behind. The Yellow Jersey group were at thirty seconds, and the next group a further minute behind. The sleety rain began to fall, along with the temperature.

Rowsell was joined by Juniper and together gained a lead of 1:58. The Yellow Jersey group of around twenty girls included Archibald who was sitting in second place overnight. A crash midway through the race, saw Archibald chances of a podium disappear.

Ciara Horne had a go at bridging the gap, but returned back into the group. Race leader, Dani King’s only support for the weekend was Anna Christian who rode along side her though-out the stage. The gap grew to three mins and on the final lap, the main chasers split as they made a bid for glory.

Finishing up the final climb, Joanna Rowsell dropped Nicola Juniper, and there was await to see if King could retain her advantage. It was King, Horne then Bex Rimmington (Ikon Mazda) sprinting to the line next, with King’s team mate Christian next. Dani King had done enough to retain the lead overall, and Horne’s final drive earned her a podium place too.

Juniper’s hard effort over both days earned her a third place on GC.

The next race in the series is the Cheshire Classic, Sunday 26th April. With a field of eighty quality riders. The twelve lap circuit covers 92 kilometres with a climb up-to the finish line at Acton Bridge.