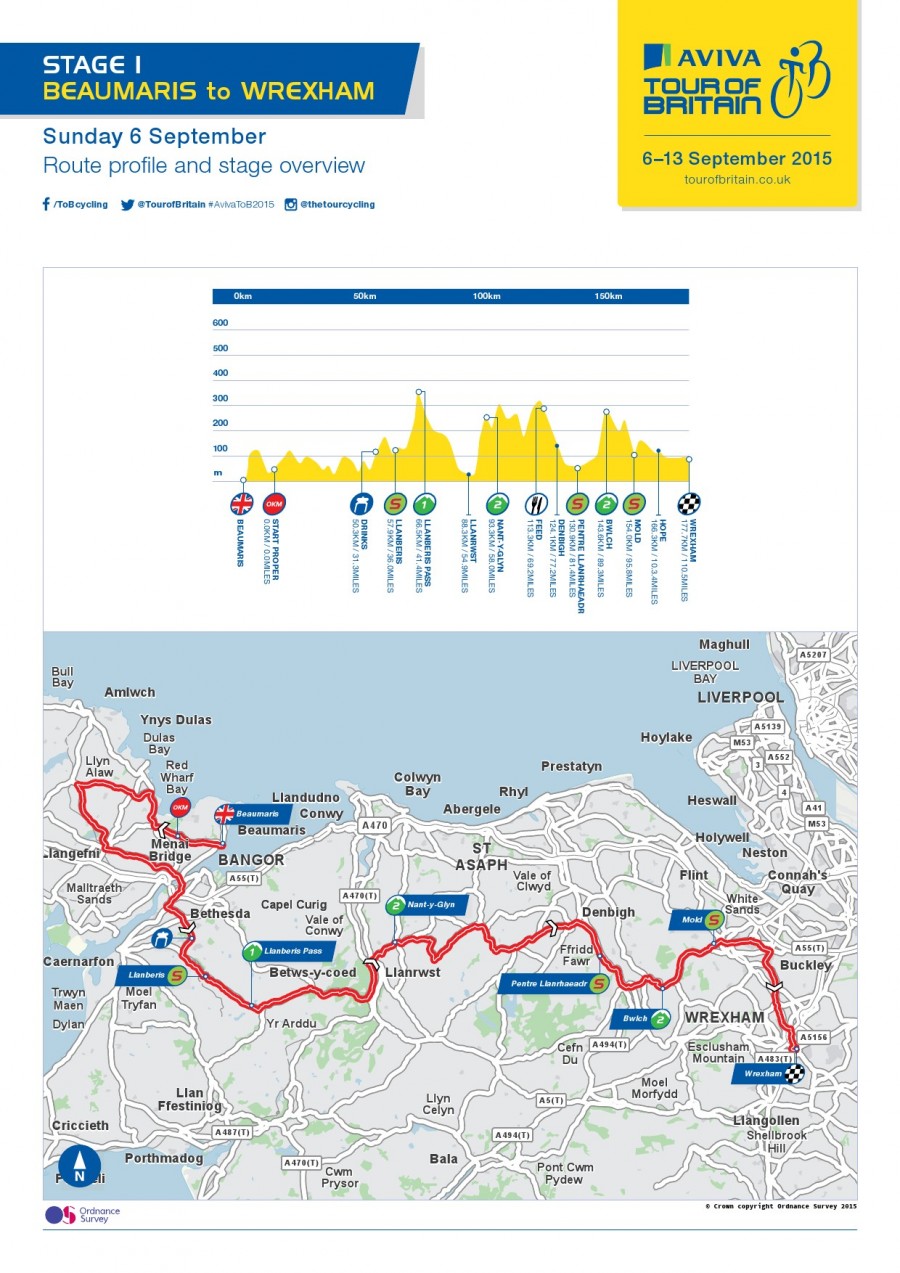 Victory in Stage One puts Viviani into the race leader’s Aviva Yellow Jersey, with a four second lead, thanks to time bonuses, over Cavendish.

The win is Viviani’s second Aviva Tour of Britain stage win, and also the second occasion that he has won the opening stage of the race, having claimed victory at Drumlanrig Castle in 2013.

On a twisting, technical finish in Wrexham town centre the Etixx Quick-Step team caught the day’s breakaway inside the final two kilometres, setting things up perfectly for Cavendish who started his sprint with some conviction at about 200-metres out.

The big danger at that stage seemed to be old rival Greipel who had tracked Cavendish and opened up his own attack to the right of the road as they swept around the final bend at pace about 100-metres from the finish.

Cavendish had quickly glanced over his right shoulder, saw Greipel’s familiar red shirt and anticipated the German’s attack but at that precise moment Viviani roared through on the blindside to win by scarcely and inch. The Italian rider wasn’t sure if he had won or not but Cavendish, a veteran of scores of close finishes, knew instantly that he had lost, thumping his handlebar in frustration.

Viviani’s performance was Team Sky’s just reward for an outstanding team performance aimed specifically at giving the Italian a sporting shot against two of the great modern day speed merchants.

After a strong four man break went early in the day it was Sky who took control of the chase with Andy Fenn burying himself for the cause along with timely contributions from his teammates and Etixx Quick-Step and Lotto Soudal.

(Kristian talks to the press after the race – Listen here) CyclingShorts

“We worked well and although I couldn’t recall all of the climbs from our recce, I did remember the final one which is why I hit out when I did and took a long one,” says House who won the SKODA King of the Mountains jersey overall in 2012 is riding his tenth Aviva Tour of Britain.

“When the break went back up from a minute to 1-minute 24 with 10km to go for a minute we thought this might actually work – funnily enough we were going through a town called Hope at the time! In my head though it was always going to come back.

“This race has always been important to the domestic teams. Going back to my first start in 2005, it was more important to us than the bigger teams. That’s levelled out now – people look at it is preparation for the worlds. This is our worlds, this and the national championships; we can show on home turf what we’re capable of.”

“It was difficult to control the break but we worked all day for that finish,” said Viviani who is already a stage winner at the Giro and Eneco Tour this season. “Andy Fenn did some fantastic work, he was so strong today, I think he is in very good condition. Ben Swift also took some perfect decisions, deciding when we work, when to close the gap.

“With 100-metres to go I was thinking it was too late but Greipel came in between the middle of me and Cav. Then Cav went in the middle of the road I saw a little space on the left and I sprinted hard. It was very close. I didn’t know if I had won but when Cav shouted “oh no” that’s when I understood. The sprint is about seconds, you wait a second and you lose.”

Second placed Cavendish, the Premier Inn Best British Rider, was gracious in defeat: “I was super nervous actually because the guys who were staying round this way re-conned it yesterday, and said it was sketchy. The last sharp left-hander it was a bit technical, the wind was blowing down through the buildings there, in the last straight, and I knew I had to lay off Mark Renshaw. It was going to be uphill, it was going to be a slog, and actually when I kicked off Mark I kicked really well.

“The line was just not coming quick enough. I looked over, could sense Greipel there and I think I sensed too much of Greipel. If I’d kept the left hand shut maybe I would have got it, but I was too concerned with the right and Elia came through on the line. Actually I’m pretty happy. I’m super happy with the team but obviously it’s disappointing not to win.

“This is the best race to prepare for the Worlds; it’s hard, it’s heavy roads, long stages. People come here to prepare for the worlds now. And I just hope Mick and the organisers keep it like this, and don’t make it crazy, stupid hard. I like to race in front of the home fans. And I do like to win but unfortunately that didn’t happen today.”

The sprint drama at the end of the day came after one of the most determined of breaks featuring some familiar names from Britain’s top domestic teams who between them drove it all the way into Wrexham where they were only caught by the charging peloton with just over one kilometre to go.

Kristian House of JLT Condor presented by Mavic, Tom Stewart of Madison Genesis and Peter Williams of ONE Pro Cycling usually manage to leave their imprint on the Aviva Tour of Britain and on this occasion were joined by Conor Dunne of An Post Chain Reaction.

Together they comprised the almost perfect break, riding strongly as a quartet for the best part of 170-kilometres from Anglesey, over the Menai Bridge and through Snowdonia and the six counties of North Wales, at one stage running up a nine-minute lead.

The Aviva Tour of Britain is British Cycling’s premier road cycling event giving cycling fans the opportunity to see the world’s best teams and riders competing on their door step.

The Aviva Tour of Britain have secured live TV coverage for the whole event. Starting with stage one, Anglesey to Wrexham at 13.00pm on ITV 1. The remaining stages will broadcast live at 13.00pm on ITV 4, with the final stage in London staring at 15.00pm. Highlights will be shown each evening at 20.00pm on ITV4. 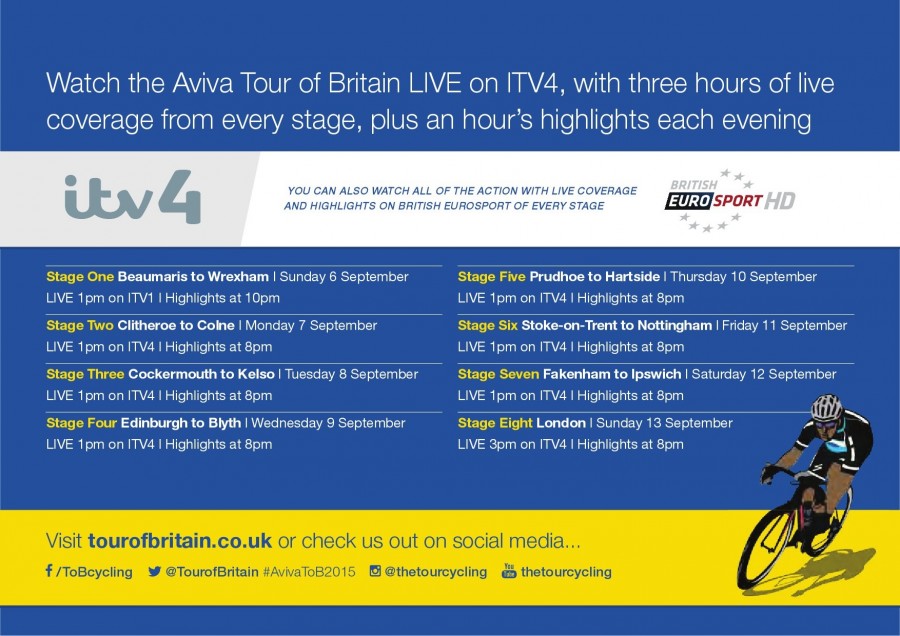 Stage Two on Monday 7 September sees the race head to the Lancashire hills, racing from Ribble Valley to Pendle over 160-kilometres of undulating roads between Clitheroe and Colne. The stage starts from the centre of Clitheroe at 11:15am, with live coverage on ITV4 from 1pm. 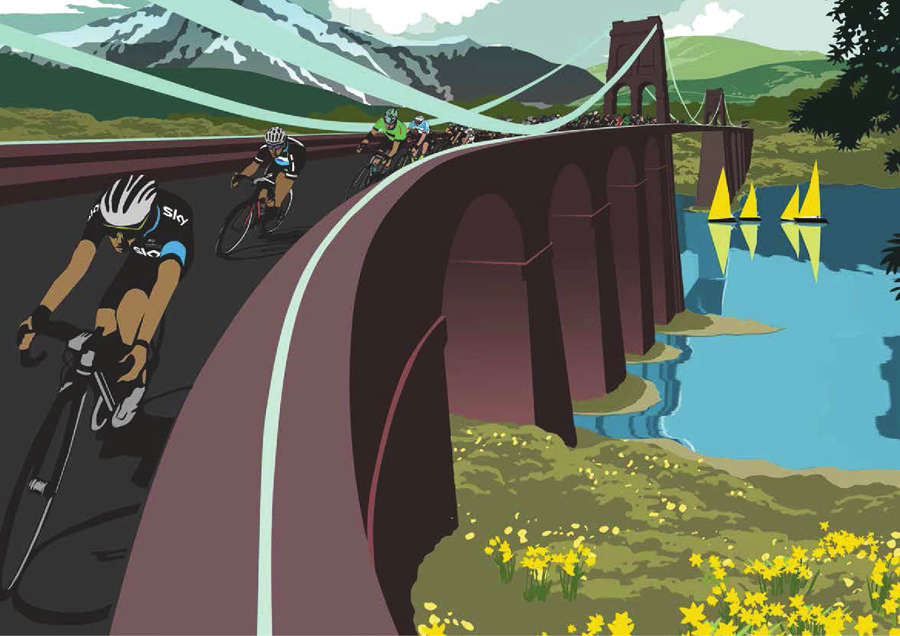