Shooting from the second row of the grid on this twenty lap race, HM Plant Honda’s Shane Byrne led the bunch into turn one. But it wasn’t long before Swan Yamaha’s Michael Laverty passed Byrne to complete lap one in front.

The first Showdown win went to Samsung Crescent Suzuki’s Ex MotoGP rider John Hopkins who began his move from fourth on lap eleven. A mistake by Hill on lap thirteen forced himself and leader Byrne back to third and fourth as team mate Laverty took the lead once more. American, Hopkins was now up to second position and made his final move through the Fogarty Essess to go on and win the race.

It was Laverty that got across into turn one first, HM Plant Honda’s Shane Byrne lent into him and both motorcycles went into the gravel pit. Several other riders ran wide, but all managed to return to the track upright.

Swan Yamaha’s Tommy Hill was gifted the front position with reigning BSB Champion Ryuichi Kiyonari after replacing his engine between races slipped into second. Race one victor John Hopkins took third whilst Relentless Suzuki’s Josh Brookes was fourth. By the end of lap one, Hopkins had passed Kiyonari followed by Brookes, Kirkham then Ellison.

John Hopkins made his winning move on lap five to slip in front of Hill and a double victory here at Donington Park. By the end of the race, Samsung Crescent Suzuki’s John Kirham moved up to third with Rapid Solicitors Bathams Ducati’s Martin Jessopp fourth. Other title contenders Brookes came in fifth with Kiyonari eventually slipping back to sixth. HM Plant Honda’s Shane Byrne fought his way back for second last and gain valuable Showdown points in eight whilst Laverty could only manage fourteenth.

Standings after Round 10 – Showdown Part 1 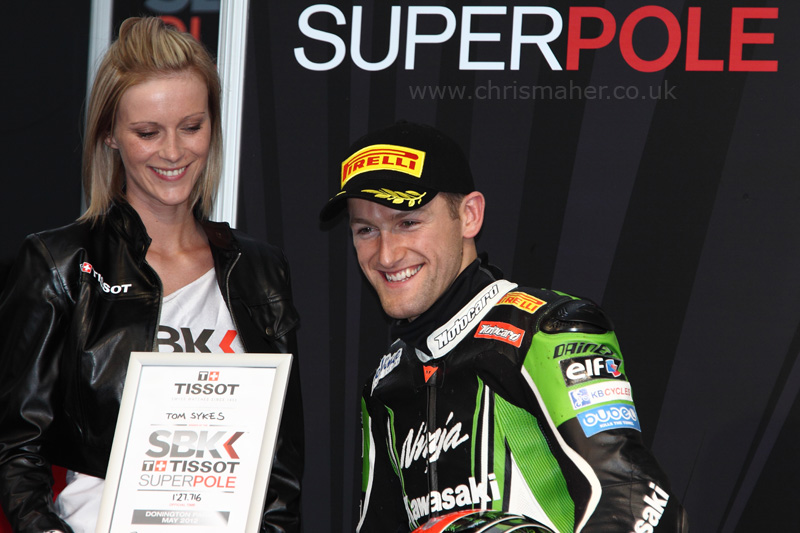