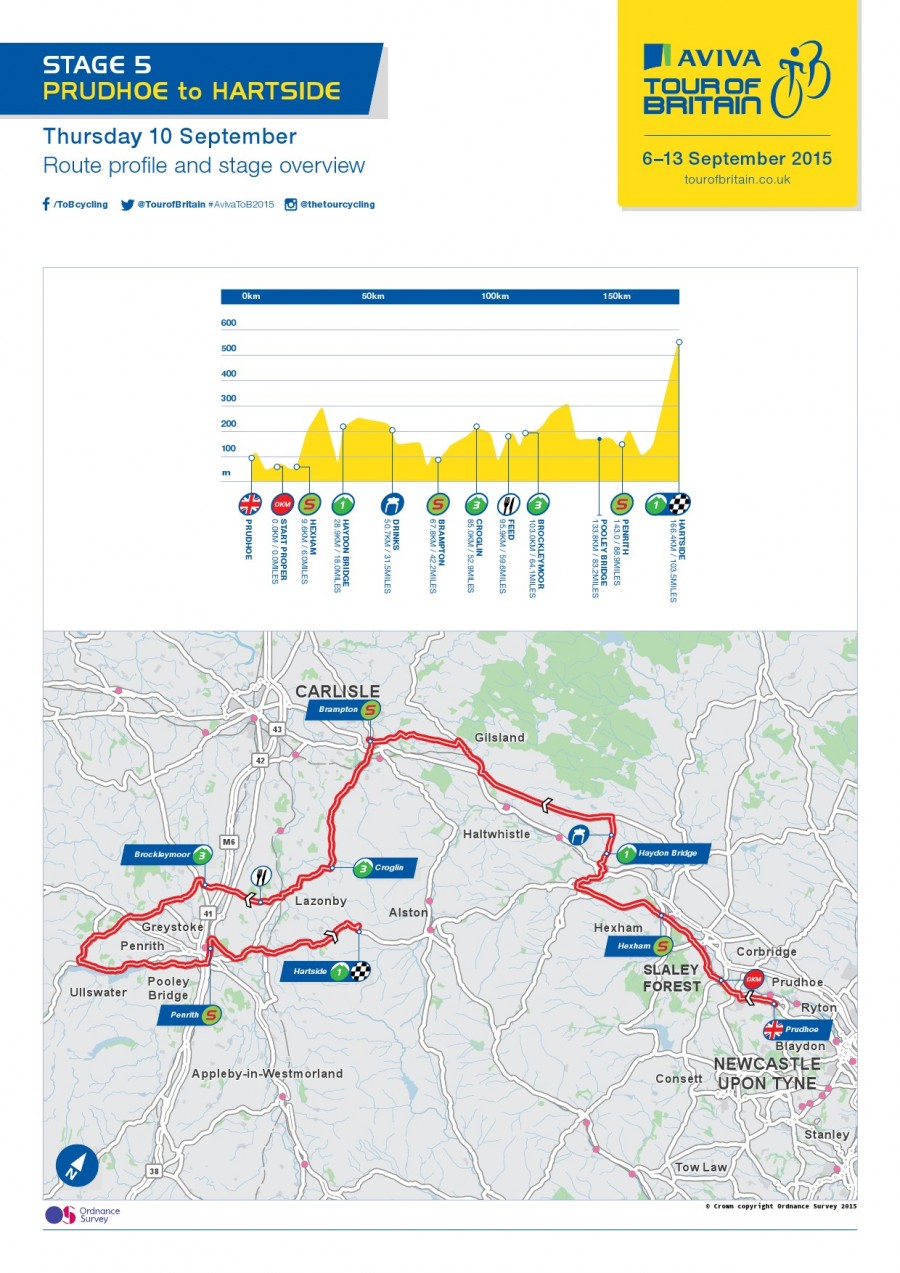 W out Poels, who did so much sterling work for Chris Froome at the Tour de France this Summer, grabbed his own slice of glory with a superb win on the queen stage of this year’s Aviva Tour of Britain, finishing at the top of the Hartside climb in Cumbria.

The Dutchman, who put in several attacks on the ascent of Hartside, eventually overtook leader Edvald Boasson Hagen in the final 200-metres, to put himself just one-second behind the Norwegian, who took over ownership of the Aviva Yellow Jersey with three stages to go.

The eight-kilometre climb to the 1,902-feet summit of Hartside re-shaped the GC, with Boasson Hagen and Poels, who started the day second and third respectively, doing battle with Lotto NL Jumbo’s Steven Kruijswijk for much of the ascent up the Cumbrian Fell, one of the longest continuous climbs in England.

Cannondale Garmin’s Ruben Zepuntke had been the first to put in a serious effort to go clear, before Kruijswijk broke away, being joined by Poels, who had been led into the foot of the climb at high speed by Peter Kennaugh, flushing out the serious challengers.

But the powerful Boasson Hagen was not deterred and bridged across to Poels and Kruijswijk and then attacked strongly with 1.5km to go looked clear and set for a stage win.

Poels though is immensely strong and durable and had paced himself well, knowing that the finale was tough going as it turned into the strong Helm Wind which blows off these Cumbrian Fells no matter how benign the day – indeed it’s the only mountain wind in Britain that has a specific name! It was blowing gently by its own standards but it was still enough to have an influence on the race.

Gradually, and then quickly, Poels reeled the tiring Boasson Hagen in and with 150m to go passed the MTN Qhubeka rider and headed for the line and Team Sky’s third stage win of the Aviva Tour of Britain. Boasson Hagen however kept going bravely to limit his losses and was rewarded with the Aviva Yellow Jersey, with overnight leader Juan Jose Lobato being one of the first riders to be dropped after passing through the village of Melmerby at the base of the climb.

Behind Boasson Hagen and Poels, Denmark’s Rasmus Guldhammer of the Cult Energy team lies at 30-seconds, with Movistar’s Benat Intxausti a further three seconds back.

With a classic tough day around Derbyshire and the Peak District in prospect on Day Six the race between first and second couldn’t be closer and Boasson Hagen, the overall winner of the Tour of Britain in 2009, and his team are certain to come under severe pressure.

In his favour however will be the inside knowledge he has on the Team Sky riders and their tactics after five years spent racing with the team and the fact that if any of the remaining three stages end in a sprint he might be better equipped to challenge for bonus seconds. It’s going to be an intriguing battle all the way to London and time bonuses could yet prove vital.

“It was really close.” admitted Poels. “At 500-metres to go when Edvald attacked really strongly, I thought I was going to be second but then he slowed down a little bit so I took my chance. I knew there was going to be strong cross winds in the last 500-metres, in fact it was quite rough for the last 3-kilometres.

“Riding in a wind like that, can be real difficult, so I went back at one stage to try to work together – there was a group of about four of us – but everybody was looking for the stage win and also I had the GC in my mind. Then Edvald attacked and he looked very strong, but I still felt strong and I knew how hard it was out there in the front riding on your own.

“It’s always nice to go for your own win and GC occasionally. I don’t get to win a lot of races but I really enjoyed today. You know when you go to the Tour de France with Team Sky you are working for Chris Froome, that is your job.”

“It’s going to be difficult to get past Edvald now because he is a good sprinter. He is looking strong but I am going to do my best. Tomorrow though is going to be a very hard stage also, so perhaps there are possibilities.”

Boasson Hagen meanwhile acknowledges that perhaps he went a little early but it was a risk worth taking.

“I knew the wind was going to be really hard but my hope was to build enough of a gap when we had the tailwind, but Wout was too strong. When he went past I tried to ride for second and I am happy to have the jersey.”

“Sky rode very strongly today and every stage is going to be hard from now on. They have been taking a lot of responsibility in the race every day. They have already won three stages and want to win the GC, so we will need to ride smart to defend the jersey. We will fight as hard as possible.”

“This race is on another level from when I won in 2009, it has become very hard. It’s also a bigger race with the crowds and Team Sky have done a lot to make that happen, and encourage the interest in the British crowds.”

ONE Pro Cycling’s Peter Williams departed Prudhoe in Northumberland on Thursday morning wearing the YodelDirect Sprints Jersey, but after another day spent in the break through the packed crowds of Northumberland the Skipton based rider also had possession of the SKODA King of the Mountains climb.

Joining Williams in the break was Madison Genesis’ Mark McNally, who won the Rouleur Combativity Award, while thanks to the performances of Intxausti and Ruben Fernandez, the Movistar Team move into the lead of the Aviva Team Classification.

The Aviva Tour of Britain resumes in Stoke-on-Trent on Friday morning for Stage Six, getting underway in the city centre at 1030, before heading for Leek and the Staffordshire Moorlands.

The route heads into the Peak District National Park, including 3,500-metres of climbing during the 192-kilometre stage that finishes in Nottingham’s Forest Recreation Ground after passing through Buxton, Bakewell, Matlock, Belper and Ilkeston. 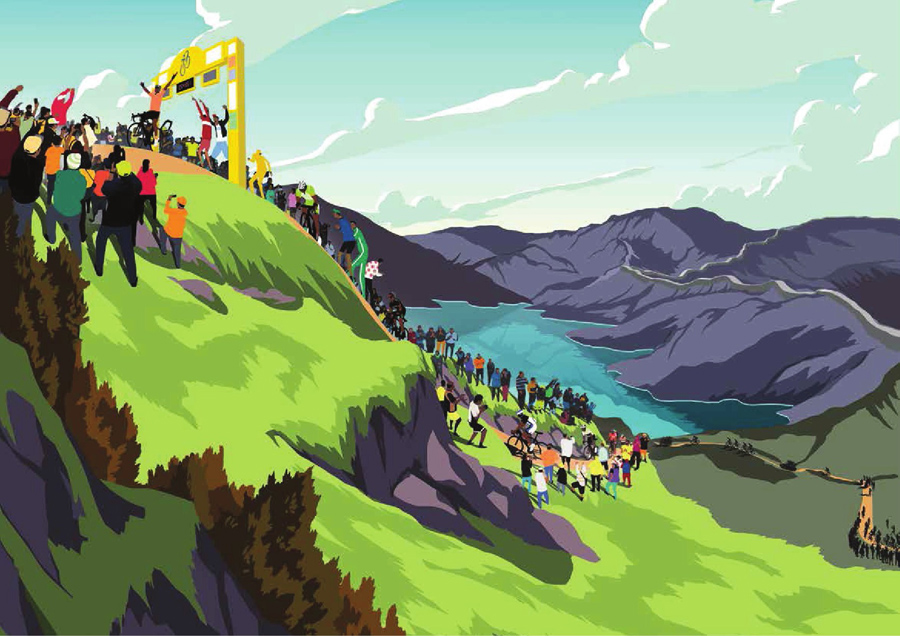