On a day of pouring rain, it was a team called Sunweb who triumphed in the Prudential RideLondon Classique today as Coryn Rivera powered past her rivals to take the world’s richest one-day prize in a frantic sprint down The Mall at the end of an absorbing spectacle.

Rivera emerged from under Admiralty Arch at the end of an hour and a half of helter-skelter racing around St James’s Park, Parliament Square and Whitehall as a long line of riders, led by Canyon SRAM’s Lisa Brennauer, bore down on the Finish Line.

The American had kept her powder dry for much of the race, sheltered by her well-drilled teammates in the heart of the pack until the final lap. But she emerged when it mattered most to skim past Brennauer on the outside and hold off the fast-finishing Finn Lotta Lepisto, who was denied victory by the skin of her tyres.

With 100,000 Euros of #pedalparity prize money up for grabs this was a rich victory for Rivera, and a timely one, as it moves her up to fourth in the WorldTour rankings.

But afterwards Rivera was quick to hand credit to her teammates, who had constantly pushed the pace over the 12 tight-cornered laps of the spectacular 5.5km circuit in central London.

“We came up with a really good plan at the start of the day and then everybody executed it perfectly.”

It was so nearly perfect for Lepisto too, but the Cervelo Bigla Pro Cycling rider had to settle for second, with Brennauer a close third.

“I think I had the perfect position but my final sprint wasn’t good enough, so Coryn got past me on the line,” said Lepisto.

As for Brennauer, third place was some sort of redemption after she had crashed in the final 400m 12 months ago.

“After crashing last year, I am happy with third because the race was super-fast despite the rain,” said the German. “I tried to ride fast and stay out of trouble.”

The grey skies may have been thick with rain, but it was Sunweb who shone most brightly throughout the water-soaked race as another of their number, Leah Kirchmann, took the Continental Tyres Sprint prize.

It was just reward for the Dutch-based team who had come to the race well-rehearsed with a plan to contest each of the intermediate sprints as preparation for the final lead-out that would deliver the ultimate victory.

“We are so proud of our team performance today,” said Kirchmann after pocketing the 3,000 Euro prize. “We decided early on we wanted to go for the sprints to practice for the lead-out and I ended up with enough points to win it. It was a great demonstration of team racing.”

Indeed it was, for Sunweb seemed least intimidated by the conditions, which were always going to play a major part in proceedings, putting caution in the forefront of many minds as the sprinters’ teams snaffled up the few vain attempts to break clear.

For 11 laps Rivera barely appeared at the front of the pack where Canyon SRAM and Dideriksen’s Boels Dolmans squad took turns in pulling the 115-strong field down the long straights of The Mall, Whitehall and Birdcage Walk and into the tight U-turns on Constitution Hill and the Strand.

Chloe Hosking’s Ale Cipolini squad were also in evidence along with Sunweb as riders tested the water around the treacherous corners of Trafalgar Square.

Britain’s Katie Archibald snapped up the first 1,000 Euros sprint prize at the end of lap three, sweeping past three Sunweb rivals to take the five points ahead of Kirchmann.

Spectators cowered under umbrellas and wet-weather gear along some of the most famous streets on the planet as many of the world’s best women riders pumped the pedals as they skated over the drenched tarmac, spray flying up from their back wheels.

In these conditions, a wrong touch on the brakes could spell disaster and caution kept the field together as they approached the second sprint. Again, it was the Sunweb women who led them towards The Mall past lines of red double-deckers paused beneath Big Ben as the grey parade swept around Trafalgar Square.

Kirchmann was pipped again, this time by Christine Majerus of Boels Dolmans with Archibald adding another point to her tally in fourth. With one sprint to go the points prize was now between Archibald and Kirchmann, the pair neck and neck on six apiece.
Vos took a brief turn at the front at the end of lap eight, but it was Dideriksen who took the third sprint, Kirchmann sealing the overall sprints prize in third.

“I felt great today,” said the Canadian later. “I like this type of racing when it’s really technical and I don’t mind racing in the rain. We embraced the rain and still raced super well.”

They certainly did. From then on it was all about finding position for the finish. Boels Dolmans kept the pace high through laps 10 and 11, led by Majerus and Nikki Brammeier, with Canyon SRAM again starting to mass around their big hope, Hannah Barnes.

With one lap to go it was all still to play for, and with two ‘hot-dog’ turns to come, the big names moved into the position behind their domestiques.

Alexis Ryan led up the Strand one last time with her Canyon SRAM teammates Barnes and Brennauer behind her. Wild was lurking back in the pack with Majerus also poised. But this was Sunweb’s day and Rivera timed her final dash to perfection.

“We saw the forecast yesterday so we knew what was coming,” said Rivera. “It’s really cool to have a downtown race like this; it compares to American criterions. I love that environment and spirit, and I love crowds so it was really fun today.”

Sunweb’s day was complete when they also won the team prize. “This is definitely a highlight for me and the team,” said Rivera. “I’m really excited for all of us today.” 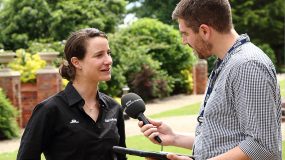 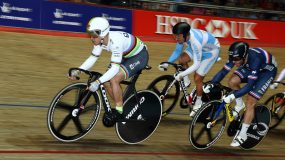